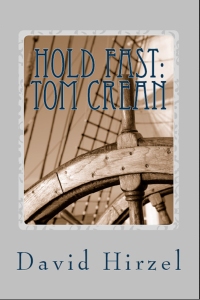 “Hold Fast: Tom Crean with Shackleton” is now available.
—Excerpt from the Introduction—

Some men are born for the sea. They run away to it early in life, and it shapes their adolescence and young manhood, their view of themselves and the world, and everything that follows. Tom Crean was such a man.

A sailor’s world is defined by the boundaries set by the rail of his ship. Beyond that rail, at an indeterminate distance, he sees but cannot reach the endless circle of the horizon dividing the blue water below from the blue sky above. It appears the same wherever in the world his ship may be, afloat on the heaving swells of any one of the seven seas. The sky and water may not always be blue. They may be gray, white with driving foam and fog, obscured by night, defined by stars, the water calm and flat as a mirror glass or risen in waves beaten by ceaseless gales. It is always so—changeless and ever changing, the same and never the same.

This is in part the allure of the sea, this placement of man against nature—defined by nature, overwhelmed by nature. If he comes home to tell the tale, he finds himself in some small measure triumphant against forces far greater than his limited power.

The call of the ice is not so different from the call of the sea. The horizon is much the same, the sky above as blue while the ice below has taken the place of water as far as the eye can see. The ice can assume many colors other than the expected white; descriptions of it are full of words like azure, lemon, topaz, aquamarine. But its apparent end is still a horizon always out of reach, its undulations and sudden motions as treacherous as a rogue wave to the unwary traveler. After Captain Cook’s circumnavigation of the supposed Antarctic continent in 1773-1774 a host of explorers had gone there in his wake ice and come home with tales of wonder and suffering, as though the two experiences were somehow unalterably linked. Some men are born with a love of this.

The sound of brash ice scraping along the side of the ship with a sound like broken glass shaken in a box is a lullaby to their ears, a familiar song they know long before the first time he hears it. The ever present knowledge that their ship might be gored by a floe and sink without a trace only serves to heighten their desire. When he said “What the ice gets, the ice keeps,” Shackleton was referring to more than just the doomed Endurance splintering under the irresistible pressure of sea-ice in motion.

REVIEW COMMENTS:
–“Hirzel is a man somewhat obsessed with Crean’s story, and he relays it in an engaging way, with solid writing but not overly dramatic–ways you could describe Tom Crean himself. . . . He is a good storyteller and Crean’s is a story worth reading.” (Michael Ruggerio review in Sea History Magazine Winter 2013-2014)

–“Beautifully written and evocative, ‘Hold Fast’ pulls the reader into the mind of Tom Crean and immerses her in his experience. . . .This is a book in which Tom Crean comes to life!” (Joan N. Boothe, Antarctic historian and author of “The Storied Ice”)

–“The value of this re-telling is that it’s done from the perspective of Tom Crean, one of the most remarkable Antarctic explorers and companions of the Heroic Age. Hirzel’s approach is of a non-fiction novel which makes for a very readable account. It belongs on that increasingly longer shelf of Shackletonia.”– (Rob Stephenson, Antarctic explorer and webmaster of the renowned www.antarctic-circle.org )

–“HOLD FAST . . .continues the story of Tom Crean, begun in Sailor on lce. The books aim to tell Crean’s story in the most exciting, engaging way possible. With the exception of a few imagined conversations (clearly identified as such), everything in the book comes from the written record, or from conversations with Crean family members.”– (James Caird Society Newsletter, Summer 2013)

–“HOLD FAST is not a rehash of the history of Sir Ernest Shackleton’s 1913-1916 voyage on the Endurance; it is true tale told as a rattling good yarn from the perspective of the Endurance’s Second Officer, Tom Crean. Crean never wrote his own version of the voyage. Now a century later, Hirzel has done it for him. Without Crean’s quiet heroics, Shackleton and the whole crew would have perished. With Crean, all 28 explorers survived. . . .Having read Hirzel’s earlier book, “Sailor on Ice: Tom Crean” – about the vital role this Irish sailor played as a member of the Terra Nova expedition during Robert Scott’s tragic 1910-1912 attempt to win the race to the South Pole, I eagerly await the third book in Hirzel’s Tom Crean trilogy.” (B. Bigler, Amazon.com review)

–“Your wording in your book is so riveting. I’ve only read passages but you pull people in like a good ride on a sea of waves.”– (Jean Bartlett, journalist)

–“Well, I’m about half way through chapter 1 of your fabulous book! I read the introduction and the prologue. . . .And now I’m seeing things about my great, great uncle. It is almost unbelievable that you and I have met and have a common interest!!! I’m reading with avid interest. I like your “narrative” style very much!” (Audrey L., great-great niece of Birdie Bowers

Original material ©David Hirzel 2011-2015. Unauthorized use and/or duplication of this material from any page of this website, without express and written permission from this blog’s author and/or owner is strictly prohibited. Excerpts and links may be used, provided that full and clear credit is given to David Hirzel with appropriate and specific direction to the original content. Quotations from published or unpublished works by participants of of the "heroic age of Antarctic exploration" are either public domain or fair use quotations derived from works named in the "Antarctic Bibliogrqphy" page. Copyright belongs to those entities.
Loading Comments...
%d bloggers like this: